“Color is really what I’m talking about when I talk about everything,” says artist, writer, educator, and horticulturist Lorene Edwards Forkner. The array of color in nature drives her work, “Seeing Color in the Garden,” an Instagram series she has now been producing daily for nearly two years. At the Slow Flowers Summit in June, Lorene will host a visually inspiring presentation by the same name that will focus on color in nature and the power of seeing it.

Having always felt drawn to creating and making, “I went a traditional route and pursued art in college,” Lorene begins. The connection between her art and the natural world solidified, however, when she was staying home with her second child. “We went outdoors to escape indoors,” she recalls, “at that point I began doing my making and creating in the garden.” Laughing and checking the length of time against her son’s age, she continues: “Something definitely chimed with me when I was out in the garden. I found the medium that I would go on to work in for the next…29 years!” Around the same time, Lorene started a job at a nursery; later she opened her own nursery in Seattle, which she owned for 14 years. While exploring the intricacies of raising plants, Lorene maintained her artful perspective on them. “As much as I loved geeking out on the names and the science and everything in the natural world, I was always keeping in mind a creator’s perspective of manipulating the environment,” with an emphasis on “human and nature interaction,” she explains.

Lorene’s daily practice, “Seeing Color in the Garden,” which she shares every day on Instagram (@gardenercook), features specific natural elements—for example, a twig, a sprig of leaves, or a flower—against coordinating color swatches mixed uniquely from her watercolor palette. The series, she says, is “strictly driven by the process; it’s the discipline of doing something every day.” Beginning with an external prompt—a specific element of a plant, for example—Lorene focuses on seeing. “I do it as kind of a meditation, or a get-out-of-my-head thing,” she says. “It’s not about the finished product; in fact, most of the paintings don’t really look like much at the end of the process.” Attempting to capture the beauty of the natural world, however, keeps Lorene motivated. “People see my watercolor palette and it probably just looks like mud to [them], because the colors are all touching and mixing and blurring, but that’s kind of how it is in the world,” she says. “The natural world is not made up of paint box pigments. The yellow in our paint box doesn’t look like the yellow of the witch hazel outside my window. It’s a mix of layers.” She concedes: “More days than not, I’m just frustrated because the color that I see in nature is so luminous—nature does everything so much more elegantly than me and my paints.” Even so, “if it’s a daily project you can’t get too bogged down, because you’ve got tomorrow, and the day after, and the day after,” she says.

A snapshot of Lorene's IG feed

In her Summit presentation, “Seeing Color in the Garden,” Lorene aims to talk about color as “a living force”: “Color in the natural world is there to attract the attention of living creatures; it’s purposeful but it’s also delightful,” Lorene says. If in your art—“be it with florals or interiors or making a garden space for yourself”—you can harness the power of color in nature, “you are going to have that point of connection with all living things; if you have flowers in your garden, you’re going to have wildlife in your garden—butterflies and bees and birds.”

Lorene’s focus on making connections and telling stories—for example, with flowers—comes through in her approach to her art and her work with customers, readers, and students. “In the years that I had the nursery,” she gives as an example, “people would talk to me about the sweet peas that their grandmothers grew or the dahlias that their dad was obsessed with, and it was about the sweet peas and the dahlias, but it was also [about] the stories of the relationships and the connections with family.” With flowers, “you’re talking about the deepest, most meaningful stories in our lives, in the course of being a human,” Lorene says, citing examples like marriages, births, or deaths. Flowers can tell these stories in shorthand, she asserts: “Flowers can be that storyteller.”

See Lorene's Online Shop for Prints of her watercolors

Slow Flowers welcomes our 2020 Summit contributor E. T. Perry. E. T. is a writer and editor based in New England. She graduated with honors from Vassar College in 2013, earning her BA in English and specializing in literature and literary theory. She is a lover of sustainable agriculture and self-reliance, and has experience gardening and farming, including on a flower farm in the Hudson Valley, NY. She has contributed creative writing, arts journalism, and literary criticism to a variety of publications, both in print and online. 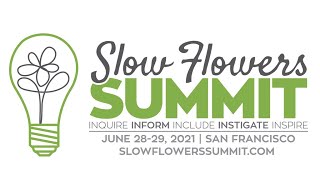